Though last weekend’s Sunday Streets HTX was not quite as lively with participants or as busy with the pop-up shenanigans of previous ones, it was compelling, all the same. The 1.5-mile route along Navigation Boulevard, connecting the East End and Fifth Ward, showed parts of a city in transition and invited us to experience close-in neighborhoods still on this side of gentrification.

Land use, in these neighborhoods, has always been truly mixed. As Raj Mankad pointed out in his “unofficial guide,” heavy-duty industry and family-owned restaurants co-exist. Buffalo Bayou is bordered on the north by a noisy Prolerizing facility and on the south by a serene hike and bike trail. Empty buildings are decorated with murals; decommissioned railroad tracks sinking into the pavement lie just a few blocks from shiny new brass sidewalk inlays marking the stamp of a management district initiative.Which is it?, the question seems to be. Past or future? These neighborhoods answer that — at least for now — it’s both.

Last month, the Third Ward Sunday Streets had bookends of activity at the corners of Dowling and Elgin and Blodgett and Almeda, with Alabama a bridge connecting the two. This time, most of the fun gathered on the Navigation Esplanade. The north end of the route was for the serious exercisers, as well as reps from the Last Organic Outpost, Japhet Creek, and Asakura Robinson, availing themselves of the views: 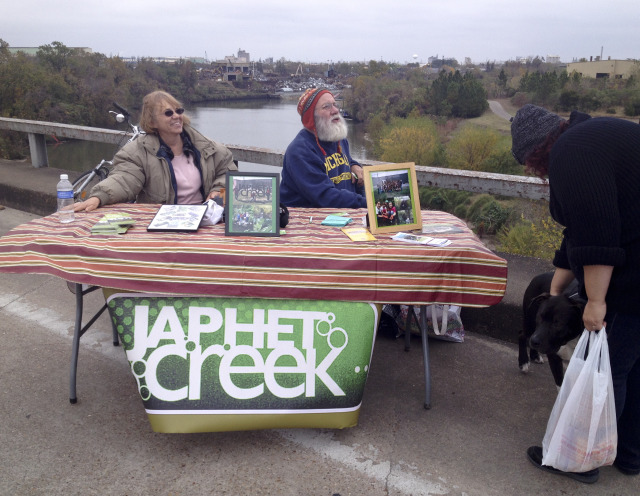 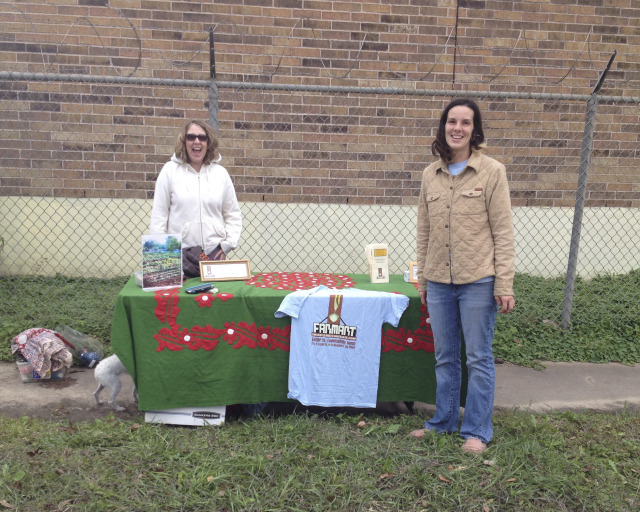 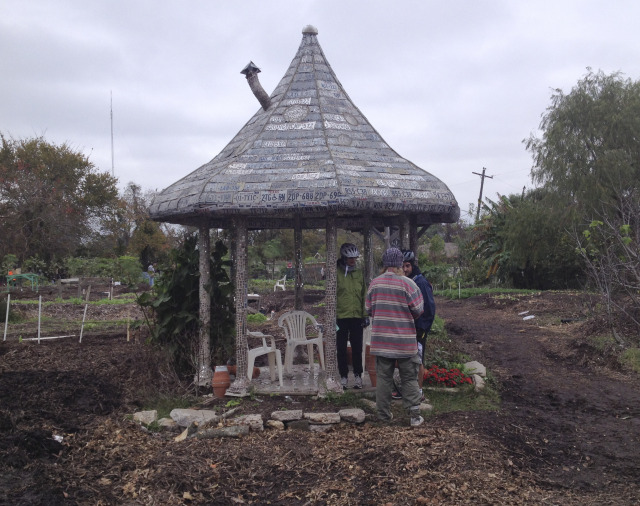 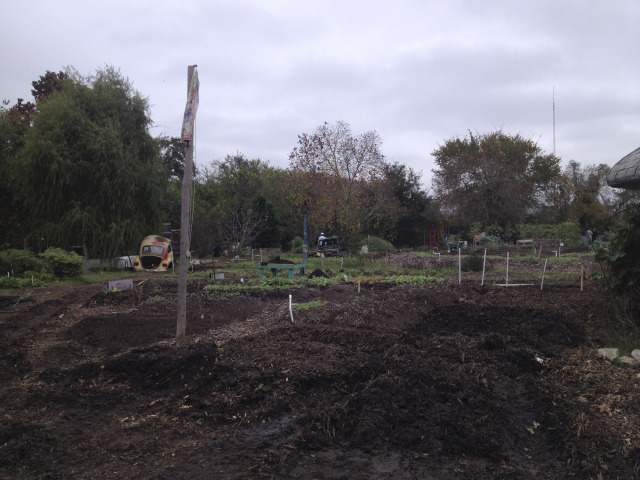 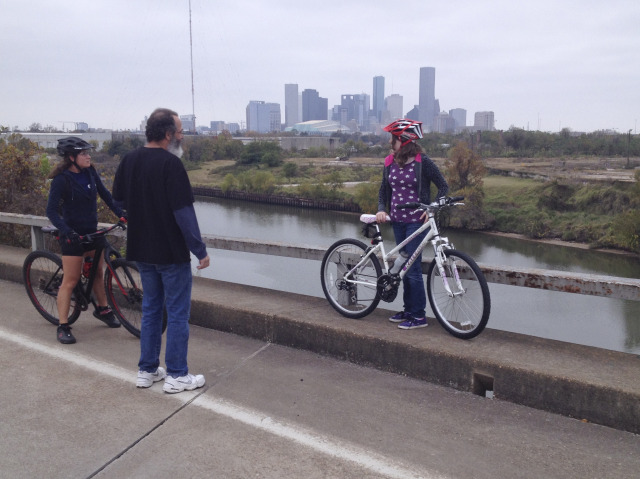 Heading east back along Navigation, you could see the skyline from the crest of the overpass near Tony Marron Park and the former KBR site, scraped for redevelopment. The route then took you past the Longhorn Building (now for sale!), built in the 1920s and home for many years to the oil field equipment supply company: 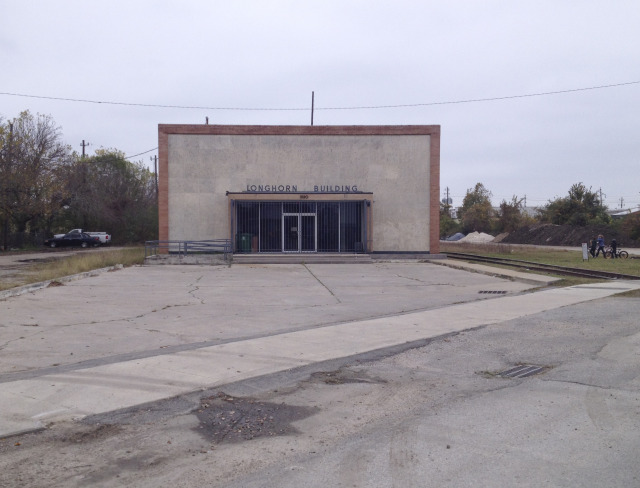 On the side of the Longhorn Building is Jesse Sifuentes’ mosaic mural, part of Transported + Renewed and a popular stop both for selfies and otheries: 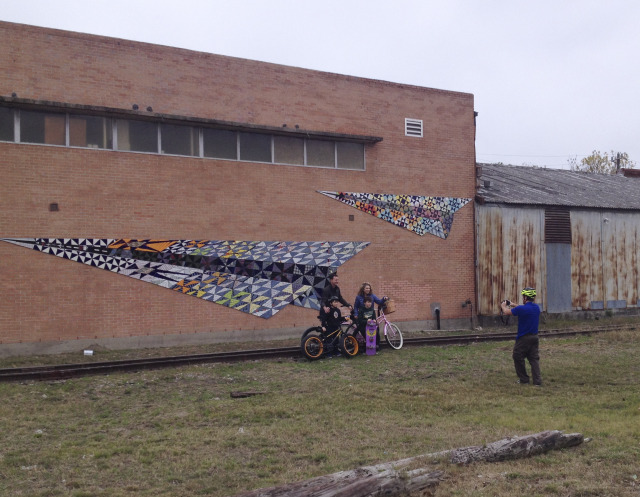 Further west along Navigation, Ninfa’s and El Tiempo were packed with their usual Sunday busyness. The Esplanade, though, was alive in a way I’d never witnessed before: temporary though it might have been, it was functioning as a public space, with a range of people expressing themselves, spending time, and interacting peacefully and creatively. Representatives from theBattleFrog obstacle-course races were signing people up. Southside Espressoschlepped their stuff all the way from Montrose to serve hot coffee on the chilly day. Nisha’s Quick N Ezee Indian Food was selling samosas. Barrio Dogs was raising awareness about responsible pet ownership. Andrew Cobb and Rebecca Verm from Sown and Grown hauled a trailer with fresh greens and seedlings for sale. 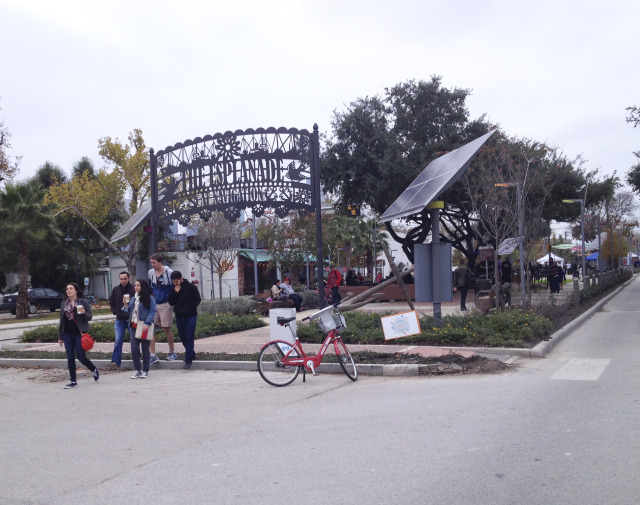 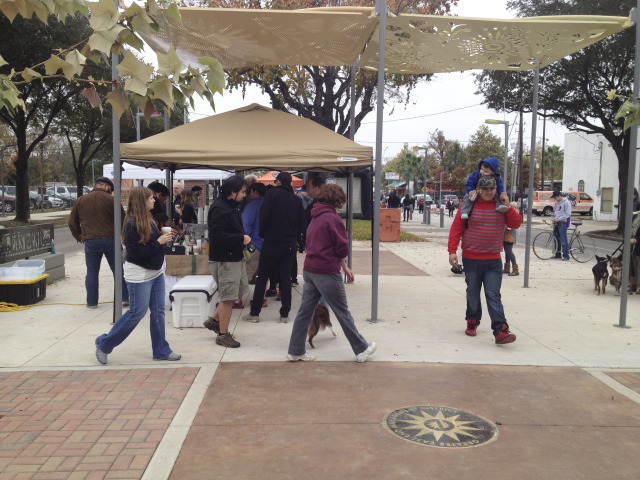 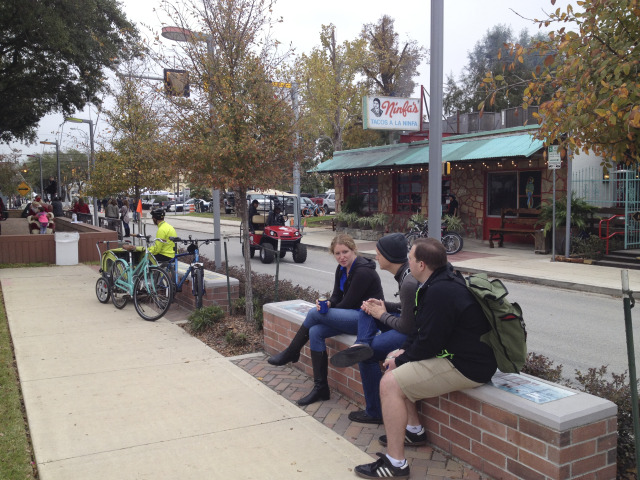 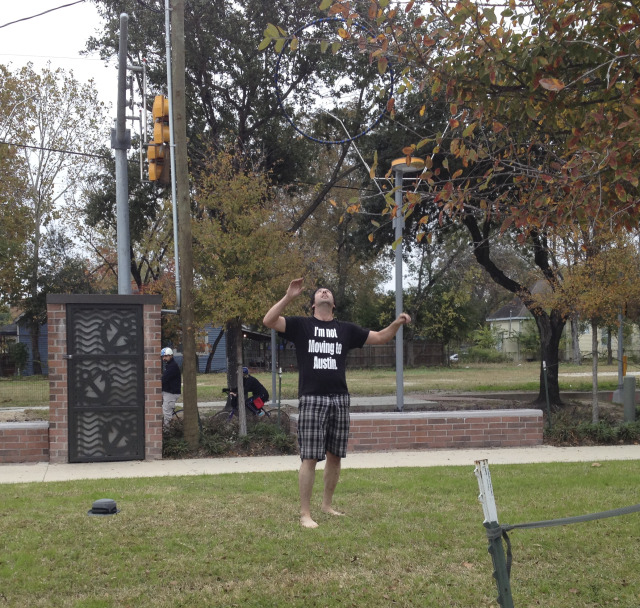 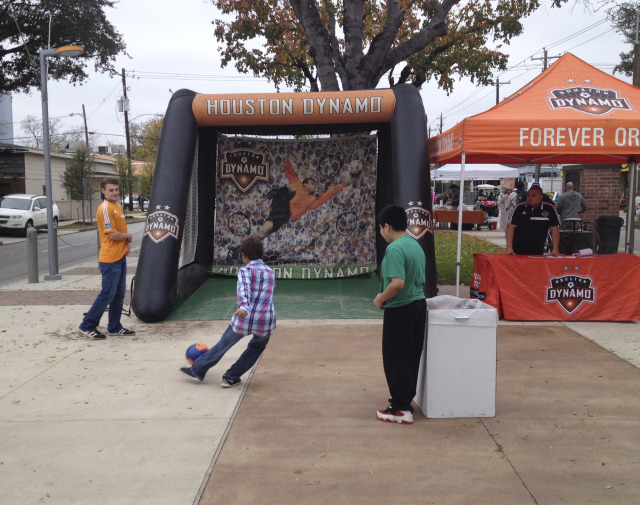 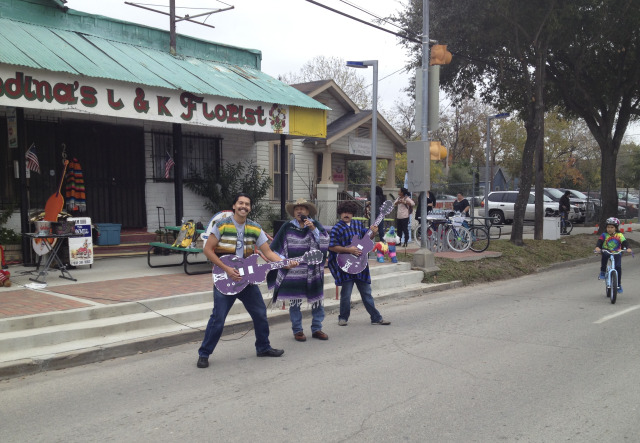 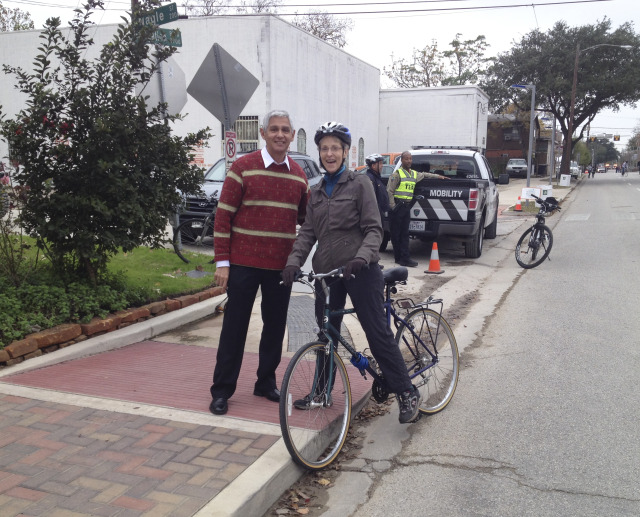 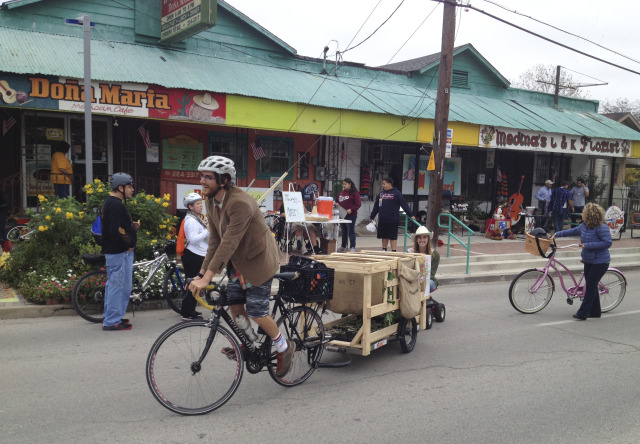 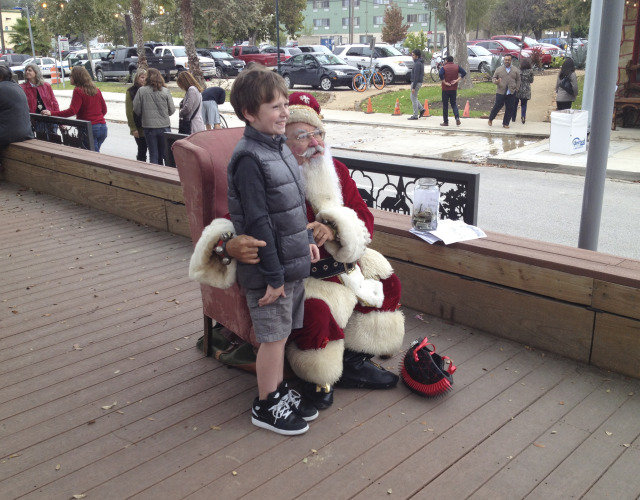 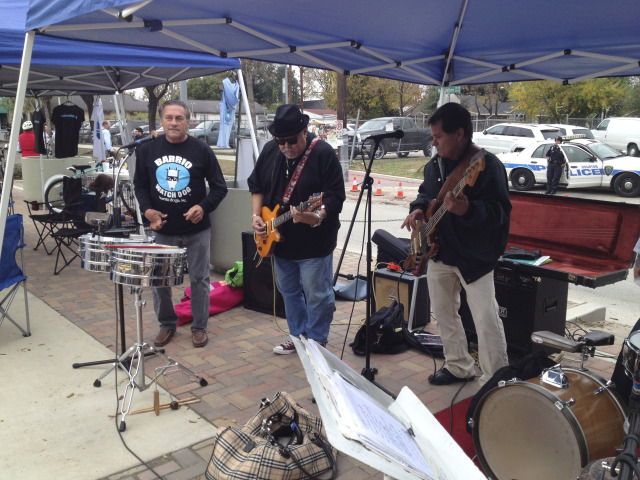 It was a good way to end Houston’s first year of Sunday Streets. Cigna has agreed to sponsor three more in the spring, but the dates and routes have not been announced. Anyone who remains skeptical about Sunday Streets, or doubts the evidence that a walkable built environment helps to foster public health and can improve civic engagement, economic activity, and public safety, I would encourage you to suspend his disbelief for just four hours and try it this spring. Call it your New Year’s resolution. It’s hard not to feel swept up in the enthusiasm, the optimism. It could be the chemical rush of endorphins from being on my bicycle, but I don’t think so. Pushing to imagine a more sustainable city — in which local businesses are prominent; in which residents come together to activate public space with art, performance, and conversation; in which walking, biking, and other forms of transportation are given infrastructure, not merely lip-service consideration — is what Sunday Streets is about. Each one gives us time and space to rehearse and begin to see that city as a possibility.

As we rode home, heading back east on Navigation, we passed anotherTransported + Renewed piece, Autoflora by Amber Eagle, a brightly painted flower built out of Volkswagen hoods. The sculpture, a mash-up of natural forms and artificial materials, a willed symbol of growth culled from discarded scraps, seemed a perfect metaphor. 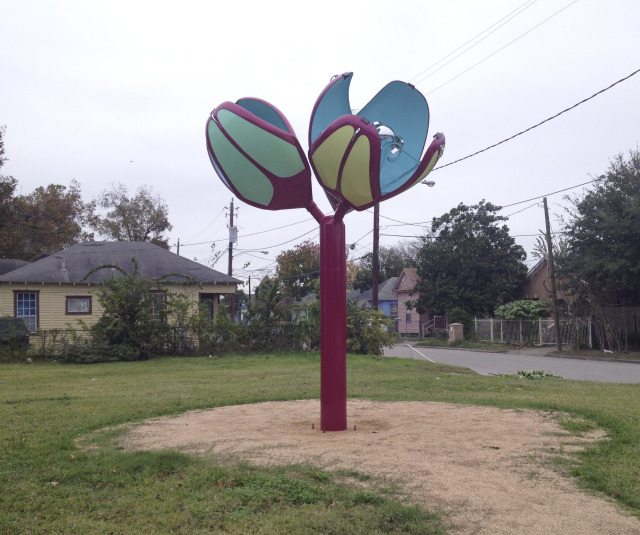